THE REAL AND ORIGINAL BOSTON ELECTROLYSIS-YELLOWPAGES.COM 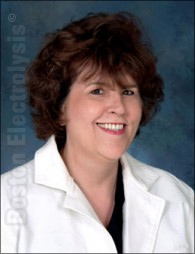 Laser Parlors should be required to inform their clients they will need touch-ups for the rest of their lives. Laser operators lie like felons and advertise they do electrolysis when they do not and the public should report them for false advertising. Most people are not informed they will need touch-ups are typically needed at least up to eight times a year for the rest of your life’s..
Boston Electrolysis® & Boston School of Electrolysis Scientific Thesis on temporary laser hair removal, as compared to Electrolysis, Thermolysis and Blend which are the only proven medical technology that can legally claim Permanent Hair Removal and which is approved by the FDA.
Boston Electrolysis® CEO Kimberly Williams, R.E., Dean, to Consumers at large,

Kimberly Williams, R.E, Massachusetts Licensed and Registered Electrologist wants you know its 2021 and after twenty-four -years since 1997 temporary laser hair removal is “America’s Most Dangerous Unproven Technology”. The so called Laser Parlor Industry has failed to prove that laser hair removal works and it is not safe. I’m Kimberly Williams, R.E. and I have been a Massachusetts licensed and registered electrologist since 1979. With 42 years of professional experience I have dedicated my life to my chosen profession. It’ my professional opinion to make you aware of the existing problems of dangerous temporary laser hair removal a business experiencing on ongoing deteriorating growth largely through a complete lack of regulation, oversight and ethics due to greed. It is also important, however, to provide full information regarding the Electrolysis profession – the safe alternative and the only known method that achieves permanent hair removal. This educational report is quite extensive but I believe the public should be well informed; every consumer or patient has the right to complete information, especially regarding procedures that have a lasting effect on their personal appearance and consequently, their self esteem. Everybody wants a healthy complexion, but there are many discrepancies in the quality of the treatments available from non-licensed poorly educated Laser Hair Removal Parlors in the USA. The state where I was educated and began my practice, Massachusetts, has the most stringent requirements in the United States for licensing of Electrologists, so I have a unique perspective on this situation.

This report is based on the truth and the fact that there is no hard scientific evidence to prove that temporary laser hair removal is safe. Much of the information is, to my knowledge, being published by the layman for the first time… Desperate Laser Parlor Operators routinely advertise under electrolysis key words such as permanent hair removal and is written in a deceptive manner that any intelligent person is aware that Lasers Parlors very rarely tell the truth using fake before and after pictures and false advertising under electrolysis. In this article each scientific term is cross-referenced and defined exhibits and proves that laser hair removal is built upon a mountain of lies… I am providing this report to not only to consumers but to every post in the Food and Drug Administration AKA the FDA.

Boston Electrolysis® Report and Continuing Thesis Why the Laser Hair Removal does not work on Grey Hairs, White Hairs, Blonde hairs. Why temporary laser hair removal treatment depends largely on a patient’s skin and hair color. In my professional opinion the supposed Laser Hair Reduction process laser parlor operators lie like rugs. Laser Parlors Operators claim the best results are seen with dark hairs and light skin. However white, grey and blonde hairs are immune to the laser and red hairs are resistant to temporary laser hair removal with poor results and tragically burned skin. It’s a proven light black hair’s become bigger and tougher because laser emits excessive heat that increases the blood supply to the hairs germinative papillae making hairs growing bigger and stronger because the excessive the laser the dilates blood-vessels which increase nutrients the nourish the hair.. They say Laser Parlor operators go Ga Ga when a client that is light-skinned black dark-haired people because the light from these lasers is absorbed by the dark pigment in the hair, also known as melanin. However they never ever mention that smallest laser beam is the size of dime up to a quarter… The poorly educated laser parlor operators use magical babble Buck Rogers lingo to explain that the cancer causing Ultraviolet radiation fails to accurately target the papillae which is at least a quarter inch deep invisible to the laser and to the laser parlor operator..
The say laser parlor operators target the dark pigment in the shaft to the very base of the hair follicle which is the germinative papillae. The hair absorbs the laser energy causes the hair to heat up and hold the heat. They claim heat damages the hair root stunting future hair growth by targeting the germinative papillae.
Why is grey-haired is not generally suitable for laser hair removal?

Grey and white hair as well as blonde and light red hairs lack pigment therefore it is difficult for lasers parlor operators to detect and treat if not impossible. When a hair has no pigment to target it fails to permanently remove the hair. Trying zap away the hair, thus making laser hair removal an ineffective treatment for grey-hairs, white hairs, red hairs and blond hairs. What a waste of time because poorly educated Laser Parlor Operators cannot comprehend the laser hair removal is scam that does not work and in prime condition of black hairs on white skin it makes the hairs grow bigger

LASER STIMULATION CAUSE HAIR GROWTH AS SEEN ON TELEVISION & YOUTUBE
If you watch TV we have all seen the Laser Baseball Cap the increases blood supply and hair growth by increase of blood to the papillae at the base of the follicle. I saw young girls with light black hairs increase in size that was stimulated by their laser hair removal treatments. Seeing is believing and there is no doubt that the supposed laser hair removal treatments stimulate hair growth. She was surprised the electrolysis permanently removed her hair while the laser has always been a failure for the last 24 years since its inception…
The Ultimate Hair Growth Cap – HairMax 272 PowerFlex For Maximum Results As a Massachusetts Licensed & Registered Electrologist since 1979 I have seen many case were women with light skin and dark hairs underwent laser hair removal treatments that made their unwanted facial hair problems ten time as bad. This is one of the reasons why the Laser Hair Removal industry is in financial trouble and offers 70 and 90% Discounts. wITH SAME TECHNOLOGY THEY KILL YOU HAIR OR MAKE IT GROW. LET SEE THAT SONDS LIKE QUACK, QUACK, QUACK AND QUACK.

It’s a fact temporary laser removal is a total abject failure and don’t forget laser hair has burned and permanently disfigure many women with first, second and third degree burns from the cancer causing Ultra-Violet Radiation that lasers hair removal emits. On the other hand the Laser Parlor Industry target one youth after another generation however in my professional opinion it is not worth the risk of making your unwanted hair problem from becoming worse in addition to possibly suffering third degree burns that cannot be surgically repaired.
LASER PARLOR OPERATORS BECOME LOAN SHARKS
Many Laser Parlors have become loan sharks making easy to go in debt. However are never painful but after signed and legally trapped they the heat. you watch TV we have all seen the Laser Baseball Cap the increases blood supply to the hair by causing the increase of heat which increases blood to the papillae. I saw young girl with light black hairs increase in size that was stimulated by laser hair removal treatment. Seeing is believing and there is no doubt that the supposed laser hair removal treatments stimulate hair growth. She was frustrated the laser hair removal failed to remove her hair and caused more hair growth on her face/.